The Man in the Next Room 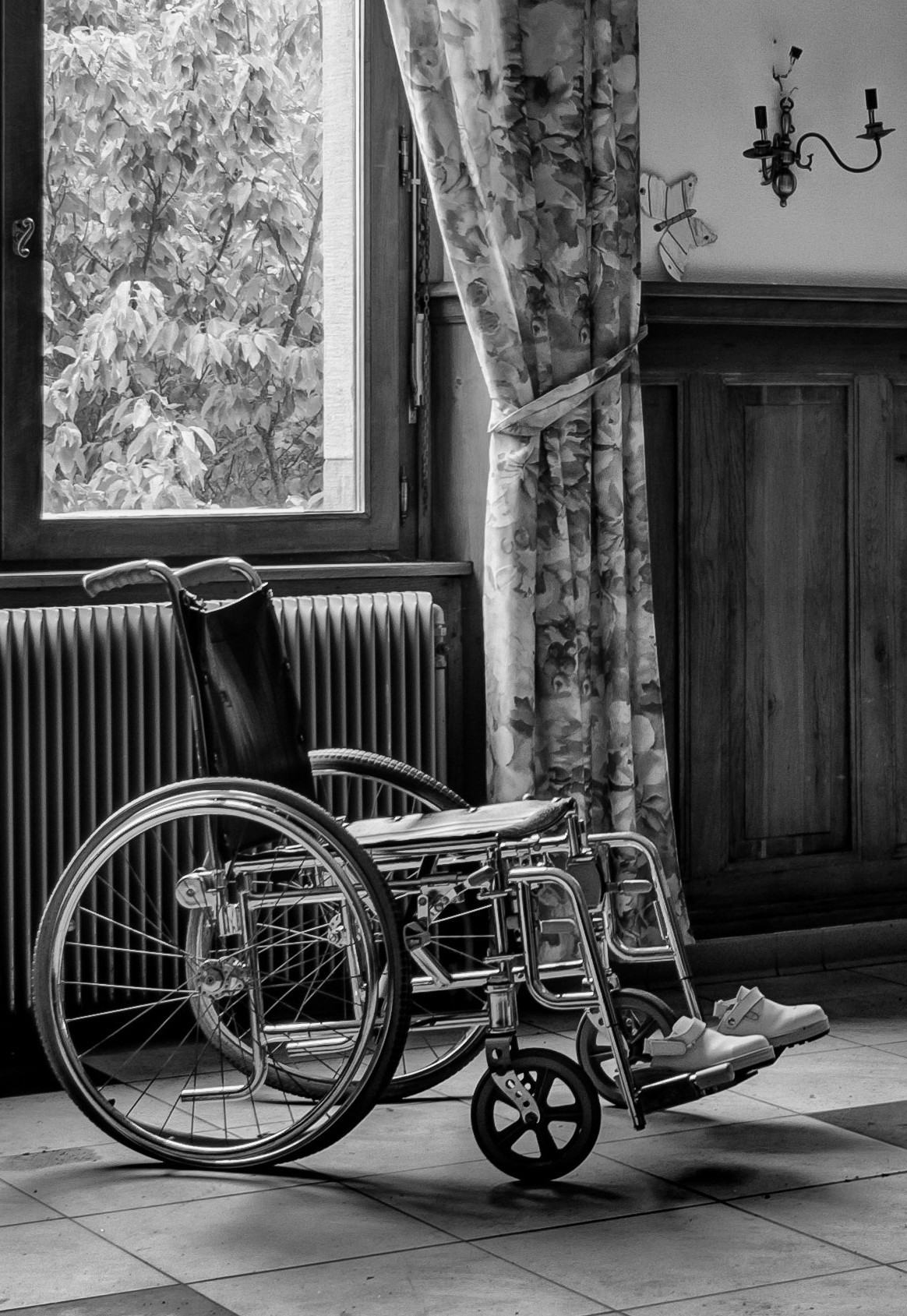 He was sitting in his wheelchair, which was just inside the doorway to his hospital room. I was being rolled into my room, which was next door to his at Lakeshore Rehab. The right side of his body was drooped from his face down to his leg, obviously he was recovering from a stroke. He had mahogany skin, curly gray hair, and an inquisitive pair of brown eyes that watched everyone walk, or roll, down the hallway. For the next few days, he was there every time I passed his room. When I was rolled down the hall by a nurse’s aide to be bathed, he was watching. Whenever visitors came to see me, they would roll me down the hall to a sunny waiting room where we could sit and talk as if everything was fine, he watched that as well. He never had any visitors while I was there. I should have had someone roll me over there and talk to him, but I was too busy feeling sorry for myself.

I had not walked more than a few steps on my own at this time. I couldn’t do anything for myself – brushing teeth, dressing, or even cleaning up after going to the bathroom were beyond me. I was also away from my kids, which was very difficult for me. On top of all this, my (then) wife was not dealing with my predicament very well and our marriage was at the breaking point. Sleep was hard to come by. In addition to everything else going on, I was wearing a neck brace that covered me from chin to chest. Trust me, there is not a comfortable position when trying to sleep in such a contraption.

One night was especially difficult and I found myself alone the next morning. The nurses came down to help me with toileting, brushing teeth, dressing and eating breakfast. I was pushed out into the hall with all the other patients, where an attendant rolled us into a large elevator so that we could go down to the first floor to receive physical and occupational therapy. The attendant pushed us straight to the back of the elevator in two rows of three, but he didn’t take the time to back us in so that we could face the front as most people are accustomed to; we just had to stare at the back wall of the elevator. Normally it was something I wouldn’t even notice, but, this particular morning, this small inconsiderate act was enough to push me even deeper into despair. As I hung my head down, I was unable to reach up with my hands to wipe the tears that fell from my eyes, so they just rolled down my face. It was then I noticed that the man from the next room was right beside me. He turned his head towards me, which was difficult for him with one side of his body paralyzed, and, in a clear voice, he recited the first part of the serenity prayer:

God, grant me the serenity

to accept the things I cannot change;

courage to change the things I can;

and wisdom to know the difference.

I have no idea how a man with an obvious stroke could recite those words in such a clear voice. I know I wasn’t hallucinating, so the only thing left for me, raised as a good Baptist, was to entertain the possibility that he was an angel sent to me in my time of need. In fact, he was discharged later that day before I could say a single word to him, or hear his story. I never even knew his name.

I have only shared this with a few people and it always ended there. But I have a few more thoughts to add now. Our lives are like a story. The life ahead of us is a blank slate – a void if you will – that is waiting on us to fill with the story that we write. As much as we would like it not to be, the story ahead of us is influenced by the stories of our past. Back in that hospital bed, I prayed to be healed. Then came the man in the next room. The story I wrote in my head was that this had to be a supernatural occurrence and that it was a sign that I was to be healed. Over the years though, I have rewritten that story. I’m sure God had a hand in the intersection of my life and that of the man’s, but as I write that story now, no angels are involved. There was just a man, a good man, but still just a man, who had seen more sorrows and injustices than I ever had. From the lonely vantage point of his doorway, he saw a younger man being rolled down the hall so someone else could bath him every night and knew that my physical weakness would make me feel like less of a man. He heard the raised voices in my room the night before and knew that my marriage was on shaky ground. He suspected that there were much harder times for me in the years to come (as indeed there were) and somehow found the strength to give me the only words that he knew from experience that would comfort me at that specific time and in the future.

If he had been an angel, my story would have been easier. A man can only do so much on his own. But my new story carries more responsibility. If a man, like him, can reach past his disability and help me carry my burden, then I can surely do the same for others. That changes the future story of my life in so many ways. I am being healed in a way that I never could have imagined and it has nothing to do with my arms. I still sometimes struggle with the idea of being a man with no biceps or deltoids, but the void lying ahead of me holds challenges that I can meet. I am no angel, but I can strive to be the man in the next room for someone who needs me to be.