"He spoke through tears of 15 years how his dog and him traveled about The dog up and died, he up and died And after 20 years he still grieves" Lyrics from Mr Bojangles by Jerry Jeff Walker 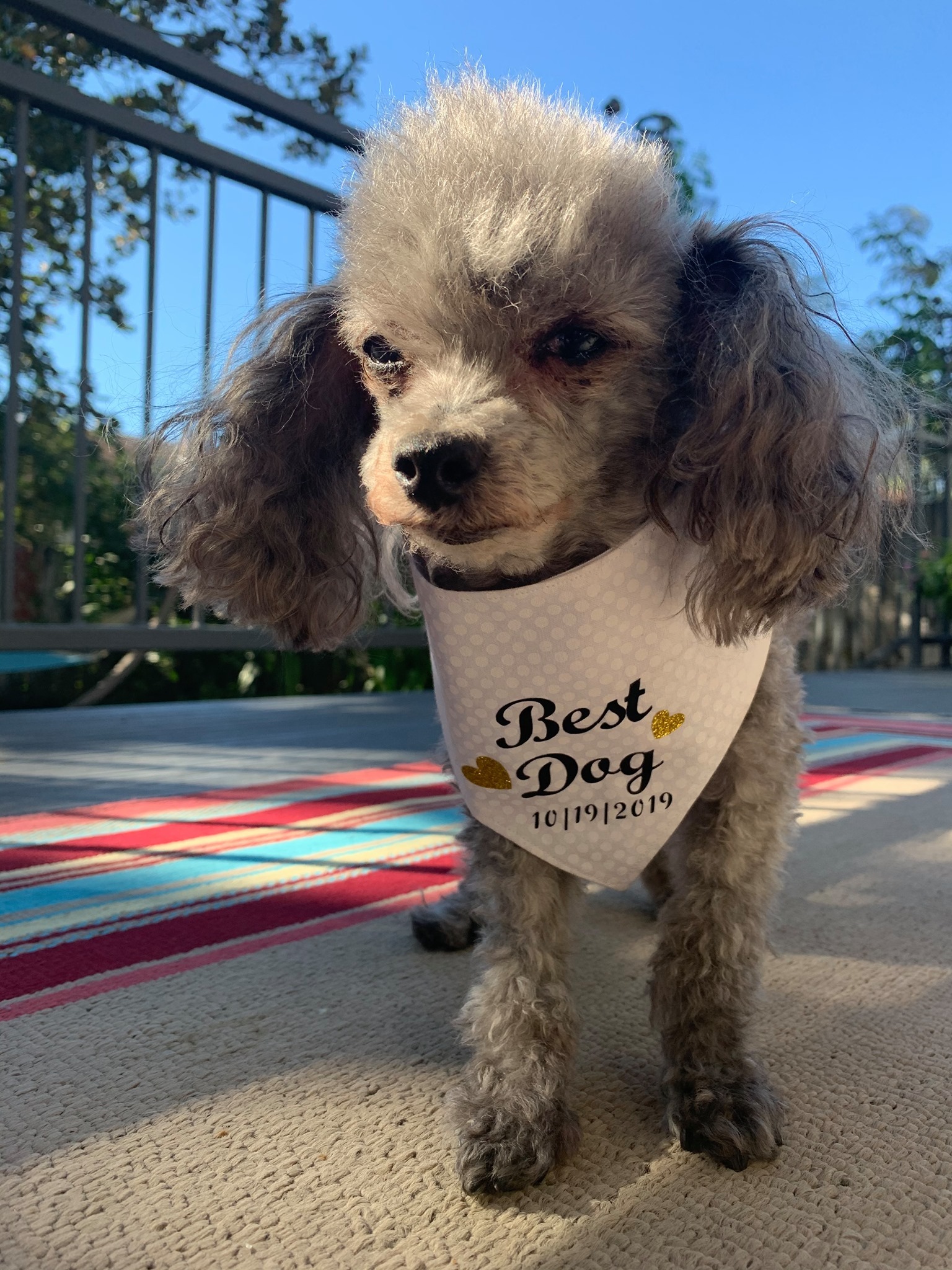 Last Friday, I got up as I normally do, went downstairs and took my dog his heart medicine. He was asleep on his dog bed as usual, and he did not pick up his head to greet me. Sometimes he sleeps more soundly than others, and I have to touch him gently and speak his name in a soft voice, then he always wakes up and lifts his head to take his medicine. This time, however, he declined to wake up. It shouldn’t have been a surprise because he had been going downhill for over a year. He had congestive heart failure, which means his heart was fighting a losing battle to keep the body supplied with blood, and, as a result, his heart grew bigger and bigger, leading to a situation where the heart itself needed more blood. An endless cycle that inevitably led to death. These thoughts did not run through my mind at the time.

What ran through my mind was a day some seventeen years earlier, when I first saw him. He was not just a toy poodle; he was the runt of a litter of toy poodles. We, and by we, I mean my former (now ex) wife and three children, decided to get a dog at the local pet store. For reasons unclear to me, the number of dogs increased to two instead of one when we got there: a Pekinese named Chloe and the poodle, which they ironically named Rambo. He was so tiny; he could have fit in a teacup. He couldn’t come home with us that day because he was very sick. The vet said if he lived for a week, we could take him home. He wasn’t very optimistic about the week. For the first time, but certainly not the last, that dog showed everyone that he was tougher than the average runt toy poodle. He made it through that week and came to live with us.

Growing up on a farm in South Alabama, we always had a dog. We had good dogs and bad dogs. A good dog was defined as one that could keep foxes and possums away from the chickens, armadillos away from Mama’s flower beds, and strangers away from the front door. A bad dog was one that did not do these things. Neither of these dogs would be considered good farm dogs, but Rambo began to grow on me. Maybe it was the name that made me give him a chance. He was never going to guard the chickens, but at least he wasn’t named François or Alphonse.

From here the years flew by and the difficult times hit me like a succession of 8-foot waves in the Gulf of Mexico. I could no longer do the job I loved, I got divorced, the kids and I moved. Then the kids grew up and moved away. We lost Chloe. Rambo and I had long conversations on the couch. I know everyone says this about their dog, but I swear he knew what I was saying.

Then a wonderful thing happened. I met and fell in love with a wonderful woman, who happened to live in New Orleans. Which is where Rambo and I found ourselves about two years ago. The years hadn’t been kind to Rambo. He was partially blind, and could barely walk due to arthritis. Then came the heart problems. I took him to the vet. I gave him medicine. I carried him outside. I even had to carry him to his food because it was too painful for him to walk across the room. I put his bed beside me on the couch so that he could be next to me while I worked. I told myself I cared for him out of a sense of honor and love, and because it was the right thing to do. But last Friday morning, I realized that I had it backwards. It was him, this little five-pound poodle, that had been taking care of a broken man dealing with scars both physical and emotional. He brought me to this place in my life and helped me find the courage to live, and love, again. Having accomplished this, he died peacefully in his sleep.

The day he died, I started to write down some of the things that I learned from him:

People will step on you. They may do it by accident, but it hurts just as bad. He was smaller than an average house cat, so being stepped on was a constant concern of his. In spite of this deep-seated fear, he loved people and wanted to be surrounded by them. He was cautious, of course, but he didn’t run and hide because of his fear.

Never underestimate the benefit of holding someone you love and having them hold you. Rambo and I went through some tough times. Divorce, disability, new city, kids leaving, the loss of Chloe. When we were so sad that we didn’t know what else to do, we sat on the couch, him in my lap and me scratching that special spot behind his ear that only the two of us knew about. It was always the right choice.

These things are important: A comfortable bed, good food, and most of all, being loved and giving it back - every day. Just like him, I found myself in a different place. It’s comfortable, there is good food here, and my wife loves me and I love her right back. He knew he was leaving me in good hands.

Physical ability is overrated, it's the heart that counts. Rambo was a little dog, but his heart was enormous. It was his large heart that did him in at the end. He loved kids the most, but anyone who gave him a kind word and a pat on the head took a place in his heart forever. Leaving this world because your heart is too full is not a bad way to go.

Getting old takes courage. Rambo had an injury as a puppy that left him with a permanent limp. Arthritis left him barely able to walk. He was nearly blind, which made his fear of being stepped on worse, as shadows would sometimes make him flinch. He handled all this with courage, but also with an attitude that was pure Rambo.

Time is fleeting. The sun rises and the sun sets. Kids grow up and move away. Old friends can’t live forever. It’s heartbreaking and inevitable. There is a quote in the book The Painted Drum by Louise Erdrich and, call me crazy, but from now on I will imagine these words came from Rambo, “And when it happens that you are broken, or betrayed, or left, or hurt, or death brushes too near, let yourself sit by an apple tree and listen to the apples falling all around you in heaps, wasting their sweetness. Tell yourself that you tasted as many as you could.”

Goodbye little buddy, your sweetness touched many lives. You won’t be forgotten.