"It takes courage to grow up and become who you really are." e. e. cummings 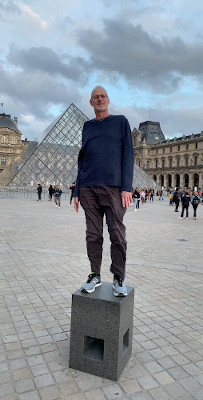 I don’t like to dwell on my disability. I go to great lengths to not let it define who I am. But today marks the twentieth anniversary of the day that I woke up after neck surgery unable to move from my neck down and I am feeling reflective. I was 35 the day I had that surgery and I was a pharmacist with years of experience in hospital, home health, and retail. I had ambitious plans for my career. I’ve heard it said that if you want to make God laugh, just tell Him your plans.

It’s called Central Cord Syndrome, because the center of the spinal cord is where the damage occurred. I was taking a few steps in about a week, and within 2 months I was walking normally. In fact, everything returned to normal except my arms. I learned how to dress myself, brush my teeth, use a fork and spoon, and a thousand other things with just partial function of one hand. Handwriting was the most difficult, as I was right-handed before, and only my left hand had just enough strength to hold a pen. I became pretty good at typing with my left hand using an arm rest. I got a truck that was adapted so I can steer with my left foot. I returned to work as a pharmacist, but pharmacy is a “hands on” profession and after ten years, it became impossible to continue.

A couple of things happened in the past couple of years which changed my life again. First, I live in New Orleans, where I moved after marrying the most wonderful woman in the world. Second, a pandemic created havoc all over the world and exposed vulnerabilities in our healthcare system. I was there when digital technology replaced paper records in hospitals and clinics, and I saw both the promise and the pitfalls of that transition. I couldn’t stop thinking about the chance to make things better. I even started a blog about digital healthcare, but I still longed to be in the middle of it. My wife never knew the 35-year-old me. Where I only saw what I had lost, she saw the potential still within me. She convinced me that my physical limitations may keep me from being the kind of pharmacist I was, but there was still plenty I could do. It was time to go back to school.  I am on track to graduate this coming August with a Master’s in Health Informatics from UAB, which, ironically, is located just a few blocks from the hospital where I had neck surgery 20 years ago. Most of my classmates are from a younger generation. They want to change the world and their passion is motivating. I’ve haven’t felt this alive in a long time.

No, my disability does not totally define me, but it is a part of who I am. I was familiar with being a provider of healthcare, but being a person with a disability taught me a great deal about being a patient. We live in a world that is difficult for some of us to access healthcare. Being someone who helps to break down these barriers, now that is how I want to be defined.