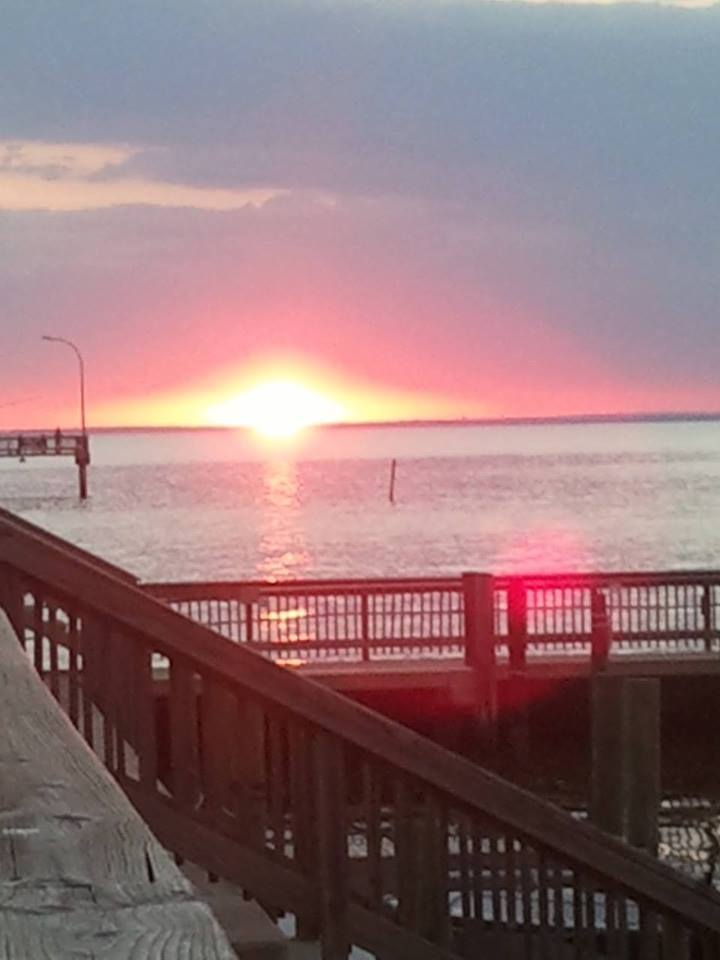 Sunsets in Fairhope are almost indescribably beautiful. There are times that, as the sun sinks into the western shore of Mobile Bay, the water turns into a color that brings to mind a huge vat of molten gold. Other times, usually on cloudier days, the sun can turn it’s glory skyward and put on a display as if God was creating three dimensional abstract art using every shade of blue, red, and yellow imaginable. There are no two sunsets the same, but all are worth watching. I have seen hundreds in the past few years, almost all of them from the Fairhope Municipal Pier.

Fairhope is a small town in southern Alabama on the eastern shore of Mobile Bay. The history of Fairhope goes a long way towards explaining how it is different from the typical Southern town. It was started by a group from Des Moines, Iowa, who wanted to start a utopia founded on the principles of Henry George. George believed in a system where land was not owned outright, but rather leased, with the rent going towards the benefit of society. This system was put in place in the original Fairhope in 1894 and was known as a “Single-Tax” colony where land was not bought, but rather leased for 99 years. The Fairhope Single Tax Corporation is still in existence today and collects rent from the original colony land. Money left over after state, county and local taxes are paid goes to support community resources such as parks, the library, and the museum.

My connection to Fairhope goes back to my grandmother. She moved around a lot after divorcing my grandfather, but she always seemed to gravitate towards Fairhope. Some of my earliest recollections as a child are staying with my grandmother in Fairhope and helping her scare away cats from her yard that were intimidating to her toy poodle – who was outweighed by your average sized house cat. To prove that life is indeed a circle, I moved here after my failed marriage, and yes, I have a toy poodle. His name is Rambo, he weighs 5 pounds soaking wet, and he is deathly afraid of cats. However, the reasons my marriage failed were far more complicated than that of my grandmother’s. Some sixty odd years of time between her divorce and mine have added layers and layers of complexities to modern relationships. Why did we both move here after failed marriages? Maybe we were pulled here by the same needs as those Iowans were so many years ago, the need to find a better life for themselves in a Utopia of sorts. Legend has it that one of the early settlers said they had a fair hope of success in this move and the name Fairhope stuck. I like to think this is what brought my grandmother and I here also – a fair hope of success.

I think about this when I drive west on Fairhope Avenue towards the pier to catch another sunset. The downtown area has a plethora of quaint shops and excellent restaurants. Page and Palette is a locally owned bookstore that provides the opportunity to hear talks from best selling writers. The flowers on the downtown sidewalks are always impossibly perfect. Pulling into the parking lot at the pier, there is a large water fountain surrounded by a rose garden straight out of Southern Living. Sailboats can be seen in the bay from a pier filled with fisherman casting nets along with locals catching up with friends and neighbors. Tourists are there year round, talking with dialects from across the country and, increasingly, from around the world. If you were to name a town that brings Utopia to mind, Fairhope would at least be in the top 10.

My sister left Alabama for California when I was a teenager. A few years ago, when I was going through my divorce, she was fighting a battle with cancer that she knew she couldn’t win. She bought a house here in Fairhope because she wanted to be closer to family with the time she had left. I visited her in her Fairhope house before she had even moved in any furniture. She was excited to be closer to family and she felt a peace about returning to Fairhope. I suspect she was also looking for that Utopia. She went back to California to pack but unfortunately she didn’t live to see another sunset over Mobile Bay.

If you get to the pier early enough, it seems like it takes forever for the sun to get close to the horizon, but once there it always goes considerably faster. I always expect to savor the moment when the last bit of the orange arc disappears. But, like most things in life, it’s over before you know it. One second, it’s there and then it’s just gone. For the last few years, a sunset to me was always more than just a sunset. It marked the passage of another day in my life. It was the death of my mother and my father. It was me being the only sibling that stayed home in Alabama while my other sister and brothers were at my California sister’s bedside when she died. It was a thousand moments that I let slip away in my life without saying the words I wanted to say. It was my grandmother’s futile search for a utopia that stayed just barely out of her reach. It was the failure of my marriage and the loss of two good arms. Is my life really so much more complex than my grandmother’s, or is it like another sunset – different in texture and colors, but bound by an underlying theme? The sun rises and the sun sets. We grow older and the people in our lives come and go. Perfection is never in the places we look for it. It is natural and beautiful and heartbreaking.

The human mind is good at looking for meaning in our life experiences, but not always good at looking at the whole picture. I believe our hearts know the true meaning of our emotions, but the mind (especially mine) is stubborn and tends to hold on to emotions a little too long. One reason I like to write is that it helps my mind listen to my heart. The sadness I feel at seeing a sunset is for things in my past. By acknowledging the pain of loss and the inadequacies of my past, my heart wants to move forward so that it can see the sunsets of my future with a greater appreciation. It is not so bad to be reminded of the fragility of life and the inadequacy of ourselves while seeing the perfect beauty of a sunset. It can be a time to reflect on the days past and to know that no matter how hard life is, there is still much beauty in our world.

The word “Utopia” was first used by Sir Thomas More as the title for a novel about a fictional island where everything was perfect. He combined two Greek words that translate as “no place”. Good wordplay by the 16th century philosopher. There will never be a man made Utopia because we will always find a way to mess things up – I know I often do. But my heart tells me there will come a time and a place where I and everyone I’ve ever loved, and will ever love, will gather around a grassy hill on the shore of a crystal clear body of water. We will watch in silent awe as the sun sets on another perfect day. There won’t be any tears or sorrows, just unbridled joy. When the sun is about to sink into the horizon, time will stop, and someone, perhaps my sister or my grandmother, will turn to me, smile and say, “Isn’t it beautiful!”