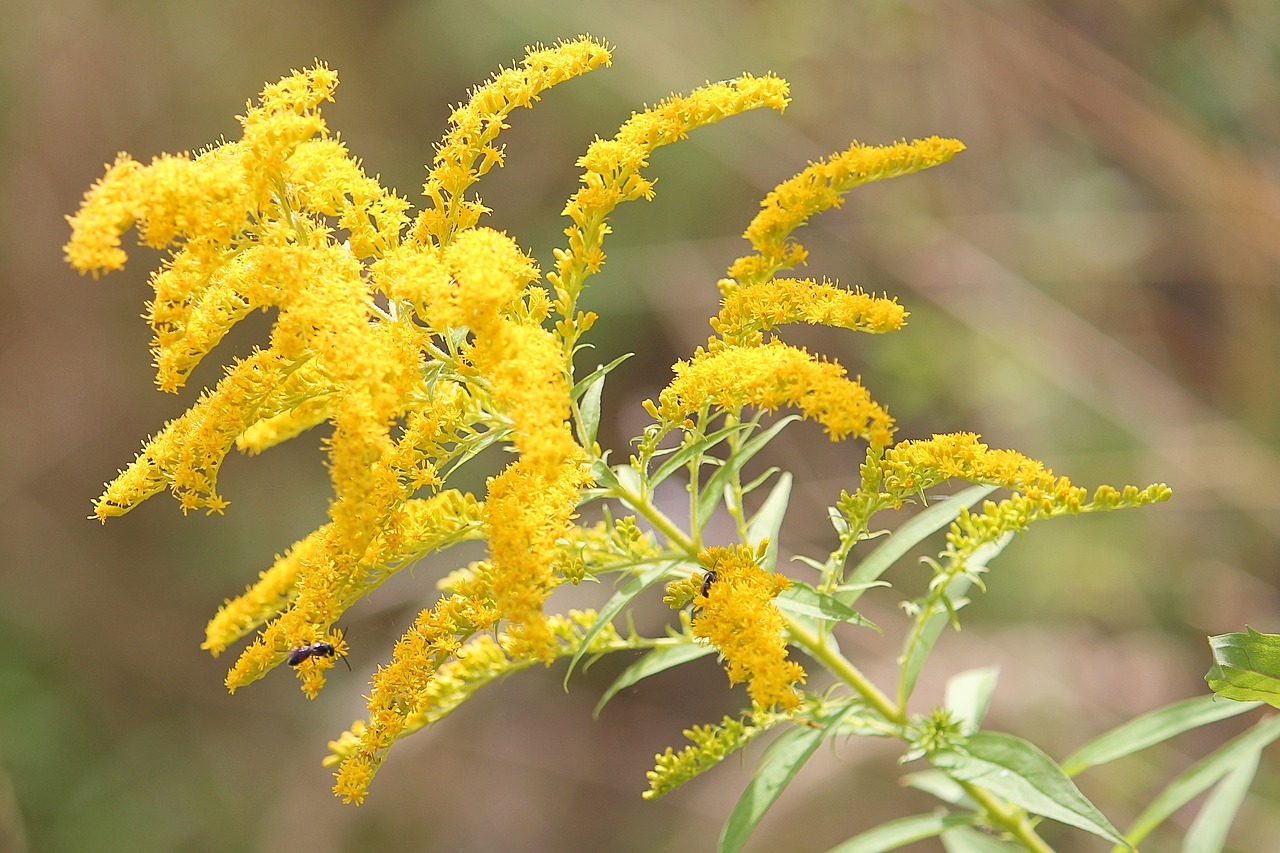 I believe in ghosts. Not like the ones you see in movies, but the ones that live on in your memories. I will be somewhere going merrily about my business and I will hear a laugh that reminds me of my sister, or see a camel hair blazer that reminds me of one my father wore. Invariably, the memory will speak to me without words. The ghosts I feel touch my spirit in certain ways, the sheer joy of life that my sister possessed, the tough as nails but elegantly charming attitude that my father carried with ease. Then, in the early fall, when the goldenrods bloom, my mother’s spirit reappears in a way to remind me of the remarkable woman that she was.

Why goldenrods, you ask? When I was about 7 or 8 years old, I picked a bouquet of goldenrods for my mother’s birthday. She and my father were busy, so I decided to surprise her. I put them in an old Mason jar and carefully set them in the center of our kitchen table, then impatiently waited for them to come home. They finally did, but before I could yell out happy birthday, my father grabbed the jar and headed out the back door to throw them in the field behind our house. As he was going out, he noticed my puzzled look and told me that she was very allergic to goldenrods. A act of gallantry gone wrong that, for me, would forever link the sight of blooming goldenrods to my mother.

I think most people expect Southern women to be delicate, demure creatures, who submit to their husbands in all things like the Good Book says, and spend their days making sure there’s enough sweet tea on hand for any potential guests. My mother did not fit this stereotype at all – our family even drank unsweetened tea (which is a blasphemy to Southerners). I’m not sure where the unsweetened tea started, but my mother marched to her own drum beat, so my money is on it being her idea. She was the Nathan Bedford Forrest of mothers – when faced with a difficult problem, whether it was calculus or teaching her kids about life, her strategy was to attack. She married my father after he came home from the war and they worked for awhile at Brookley Field in Mobile. She worked her way up to a manager’s position in short order, but they decided to move to Mineola and start a farm. Despite having three young children, she wanted a college degree, so she packed up the kids every Sunday and drove to Tuscaloosa, where she shared a house with her brother Ronnie until Friday afternoon, when she packed the kids in the car again for the ride back to Mineola and my father. She received her degree and taught math and science in high school.

She had a saying that she loved to pull out on occasion. “Jeffrey,” she would say, “You do what you have to do.” I used to roll my eyes when she said that (not until she wasn’t looking though). I’m not sure if she said that to my brothers and sisters as much as she said it to me. Truth is, I needed to hear it. I was the youngest and was always a little timid. If things got too hard, I had a tendency to just give up. My mother, being as smart as she was stubborn, wanted her words to penetrate to my inner being.

After my surgery and the subsequent paralysis in my arms, I decided it would be a good idea to get an opinion on what happened from a surgeon who wasn’t affiliated with the organization where my surgery was performed. My brother had the exact same surgery as me just a few years before, and his surgeon was willing to look at my records and meet with me. I was still at Lakeshore Rehab, but my brother and I made a trip to Columbus, Mississippi, to consult with the doctor. He was very professional, telling me exactly what happened and giving his opinion that they did a great job, proven by the fact that I was walking again. He then asked if we had any questions. Of course I did, “How much function do you think I will recover in my arms?”

He looked straight at me and said, “I think you are where you will be for the rest of your life.”

We went to a nearby restaurant to get a bite to eat. I was trying to process what he had told me, but I couldn’t get past the ‘rest of your life’ part. On the outside, I didn’t show much emotion. My brother was there and I could tell it affected him deeply, but me, being a little brother, meant I had to pretend it was no big deal. I don’t remember what I ate, but I do know I needed help eating it, because I had not yet mastered the art of compensating for the lack of biceps and deltoids by using other muscles and leverage to accomplish a task like feeding myself.

The ride back to Lakeshore Rehab that evening was tough. It was a cold winter evening, but the chill from the doctor’s words was much colder than the north wind outside. How could I handle a life with very little upper body function? I thought of the therapy I was doing at Lakeshore and wondered what was the point. Giving up was very tempting.

We were passing through Tuscaloosa when the cell phone rang. I hung my head over so that I could rest my hand on my knee and talk to my mother in private. She asked me what the doctor said. It was funny how fast I went from the ‘I’m in control’ little brother to a frightened little boy wanting comfort from his mother. I managed to tell her what the doctor said about my possibility of recovery. There was a moment of silence from her. I had never known her to be frightened of anything, but I detected fear now, as if the general astride her horse unsheathed her sword but hesitated before pointing it at the enemy and charging forward. It was only for a moment though. She recovered and said, “What does he know anyhow. You work hard at getting your strength back. Jeffrey, you do what you have to do!”

There was that phrase again. I didn’t roll my eyes this time. Every time she said it in the past, it always reminded me that both my mother and father grew up in the Great Depression. That fact always made me uncomfortable because I grew up in different circumstances and I knew I would never be as tough as they were. But now, talking to her in the hopeless state I was in, I saw it differently. The nuts and bolts of the doing are not the hard part. Once you make the decision that you are going to “Do what you have to do” the rest comes easily. The words rang true to me then as they never had before.

A few years ago, I looked up the origins of the word Solidago, the name of the genus to which goldenrods belong (isn’t Wikipedia wonderful!). It means to strengthen or, alternatively, to make whole again. Every year, when the days get a little shorter and the weather seems to at least briefly consider getting a little cooler, I see the goldenrods bloom again and her spirit speaks to mine. In my mind I remove my sword from the scabbard, point it straight ahead and say, “I will do what I have to do.” For another year, my will is strengthened and I am made whole again.